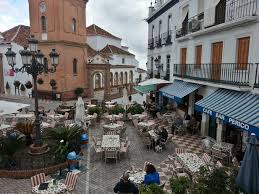 It’s late December and I am sitting at the bar at Casa Paco in Cómpeta, looking out at the rain-soaked paving of Plaza Almijara. A wet dog roams around the abandoned tables and chairs, an advert for disappointment. The cold wind sends a plastic bag break-dancing across the scene. The conditions are reminiscent of a holiday I once had in Abergavenny, until the waitress’s warm greeting, in which I have graduated from chica to guapa, brings me back to all the ways in which Spain is very different to Wales.

I am here to meet two new members of our community, Andrew and Fi, writers from the UK who are setting up creative writing classes here in the Axarquía. I’ve met their kind before, I think to myself before they arrive. Writers from London – I’d better get some wine lined up.

Meeting them for the first time they are all smiles, warm and approachable. ‘Sorry about the weather,’ I say, as if it’s my responsibility to make the sun shine.

‘It’s wonderful,’ says Fi. ‘The campo is so lush and green. This is what I love about the Axarquía – it shatters any preconceptions about the Costa Del Sol. It’s not all sunshine and Sangria.’

After they have ordered a Coke Lite and a Café con Leche Descafeinado, I launch into my first question. ‘So, have you always been writers?’ I ask.

‘I’ve written for as long as I can remember, but not seriously’.

‘Not seriously? What do you mean by that, Fi?’

‘I mean I’ve always written stories, poems and songs, and kept a journal of one sort or another, but it’s only in the last few years that I realised I wanted to write full-time.’

‘And what about you, Andrew? Have you always been a writer?’

‘Yes, it just took me a few decades to realise.’

‘Like Fi, I’ve always written in one form or another. It was just a guilty pleasure. A form of procrastination when I had other work to do.’

‘I don’t really know. I had this scene in mind. The stuff of nightmares. It was so vivid in my imagination, that I just had to write it.’

‘Can you describe it?’

‘Yes, it was a filthy room, with names scratched into the walls. There was nothing in it except a rotten mattress and a bucket. I felt like I’d been there, but it wasn’t me. I was someone else, someone whose story had to be told.’

‘No, no one’s ever reading it. I was still cutting my craft.’

‘But I understand you’ve written a novel?’

‘Yes. Fi encouraged me to apply for a place at City University in London. They boast the only creative writing MA in the English-speaking world that requires a complete novel as a submission. I hadn’t been to university before that, so I could hardly believe it when they said yes. I finished it over the summer, here in Cómpeta.’

‘It’s a thriller, set in London about fifteen years from now. It takes what’s happening technologically, environmentally and politically, and speculates on what could happen next. It’s a dark vision, so I hope we don’t go there. ‘

‘Is it a political book?’

‘No, it’s a human story about a woman who becomes a prime target for security services. It’s a tense drama because the fate of the world is at stake. It’s mostly told through the eyes of a young policeman, but it’s her story, hers are the choices that really matter.’

‘So, Fi, you’ve also just finished an MA, did you write a thriller?’

‘No, my piece was very different. My MA was Creative and Life Writing at Goldsmiths College, London, and I wrote a memoir about the death of my first husband.’

‘Yes, but I wanted to write the book I wish I’d been able to read at the time. It explores grief and loss through an account of his last day.’

‘It must have been difficult to write.’

‘Yes, of course it was, but it was also a healing and necessary process. As a writer I’m not content with simply relaying my experience. I care very much about the language, about crafting the words. This is what makes life writing something quite different to penning one’s journal, which is naturally much more freeform. A memoir doesn’t have to be about the sum total of your life, it can be about one episode that whilst deeply personal, also says something about the universal human experience. If it works, it triggers empathy and gives the reader lots of ‘aha’ moments.’

‘Yes, when it’s published. It’s on the shortlist for the Pat Kavanagh Prize and is out with agents. It’s a long process from writing to publication.’

‘Do you only do life writing?’

‘No. Nature writing is an extension of life writing that is very special for me. It can be writing that is about or is inspired by nature or using nature as a metaphor to convey emotions, characters and experiences. I would also like to write more fiction. It would make a nice change for me to step out of my head and into the head of a made-up character. I also love to write and read poetry.’

‘You said it took you a long time to realise that you wanted to write full-time. What did you do before that?’

‘All sorts of things. I studied philosophy at University and trained as a yoga teacher, but for the past two decades I’ve been working in the arts in the UK as a producer and fundraiser – all the behind the scenes stuff that puts performances before audiences. My job has involved a lot of writing, so maybe I’ve been honing my craft without even realising it.’

‘How did you and Andy come to live in Cómpeta?’

‘We came here on holiday and loved it. The community is international, yet it remains very Spanish. There’s a lot of art and creativity here. The welcome we’ve received has been so warm. We’ve only been here since July and we already feel we’ve made life-long friends.’

‘So Andy, tell me about the courses you’re running. What will they entail?’

‘Well, the first course is an introduction to creative writing and will cover the basics of writing fiction, poetry, memoir and more. Each week there will be a short writing exercise and a chance to share your work. We also have plans to do more specific courses, including one for life writing, one for nature writing and one for writing a short story. ‘

‘Who is the course aimed at?’

‘It’s aimed at English speakers, but English doesn’t have to be your first language and you don’t have to have done any creative writing before. You just need some curiosity and a willingness to have a go.’

‘When does it start?’

‘Will you be running a course for creative writing in Spanish?’

‘We’d love to. Estamos aprendiendo Español, pero poco a poco. So, not yet, but hopefully soon.’

By the time I get up to leave, the rain has cleared completely. The storm clouds that had sat dark and heavy over the pueblo are rolling away towards the coast, revealing a low white winter sun, suspended in a cobalt sky, that is already beginning to warm the Plaza Almijara. Yes, I think to myself, this is definitely Andalucía, not Abergavenny. There must be a story I could write about that.